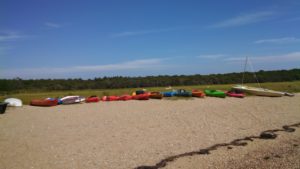 Got to live another cliché on Sunday.

My dad had the boatyard near the causeway to West Island bottom paint his little sailboat and put it in the water for him again this year. After several successive years of trying to step the mast ourselves while the boat was on the beach, this is a decision I applaud with great verve.

A metal mast for a 16 foot boat is not terribly heavy, until you try and slowly raise it from parallel to the ground to perpendicular to the ground and thread it through a hole juuuuuuust big enough for it to fit. With exactly no margin for error.

END_OF_DOCUMENT_TOKEN_TO_BE_REPLACED

The house is quiet.

And I’ve finished The Splendid Children.

I finished the initial draft and put the manuscript to rest on June 3, 2015. Between the rest periods and the flurries of active editing, it took almost exactly a year to have it ready to ship to an editor or agent. I reached that point just about midnight as June 1 became June 2, 2016.

When I started running again in my mid -20s, I did not go far and I did not go fast. But every time I finished a run, I put my arms in the air as if I was breaking the tape at the Pru on President’s Day.  Even if a two mile run is a joke to someone in actual shape, it was a big deal to me.