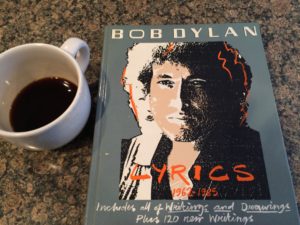 The foundations of western literature were songs.

They were not songs recorded on CD or wax. They were sung by campfires, overlooking the Aegean. Overlooking hundreds of other campfires, spreading into the distance, with shields and spears stowed nearby. Homer, if we are to believe the scholars, earned his living as a rhapsode, a professional singer of verses. The word, like many in Greek, is a combination of two parts – in this case the parts mean to sew songs together.

In the tradition forming south-east across the Mediterranean from Athens, the Songs of Solomon were real songs. Several Psalms, are sub headed:

Putting aside the petty Twitter slights, it is not hard to find the threads of serious writing in Dylan’s hundreds of songs. Not everywhere, of course No one is going to argue that “Million Dollar Bash” provides words to live by. As Johnny Carson used to say “they can’t all be gems, folks.” Strauss wrote polkas, after all.

Some of Dylan’s work has roots in the canon as deep as any “serious” literature; among the several reasons I consider Absalom, Absalom!  to be Faulkner’s greatest achievement is because of its tie to the second book of  Samuel in the Hebrew bible. Faulkner takes the bones of the conflict within Absalom’s heart in Samuel 13 forward, centered around his sister Tamar,  blurs the details and uses the framework to write a story of the American south. A story, without using the words, about its endemic racism and sexism – all without losing the essential humanity of either story. In II Samuel, the story of Absalom rising up against his father the king culminates in Chapter 18 verse 33, where the words Absalom and Absalom appear beside each other. (As an aside, I was struck dumb by the brilliance of the book long before I thought to search for the story of Absalom in the Old Testament.)

Dylan weaves similar cloth in what may be his most covered piece, “All Along the Watchtower,”  a song I loved, learned to play on guitar, and felt the brilliance of well before I went searching for the word watchtower in the Old Testament.

What appeared when I began that search, which I was led to by being handed a copy of a magazine called “Watchtower” by a Jehovah’s Witness somewhere, was Isaiah 20 and 21. Dylan’s song opens with the joker lamenting to the thief that he wants to escape his present situation – a place where, like in the music industry, businessmen metaphorically drink the wine and dig the earth of the artists on whom they are parasites. Even though none of them along the line appreciate the artistry, or “know what any of it is worth.” In the Isaiah 21 passage, princes keep the view, two riders approach in a chariot, there is a lion in the distance. In 20, there is a barefoot servant and a need to escape.

Don’t even get me started on the lyrics to “Jokerman.”